When?
How many?
Home : News : Events in Bibione : The wars of the 20th century in San Michele al Tagliamento

The wars of the 20th century in San Michele al Tagliamento

Every Thursday from June to September at 5 p.m. and Sundays from October to May at 10.30 am you can visit, free of charge, the protagonist places of the wars of the 20th century in San Michele al Tagliamento and its surroundings:

The tours are offered in both Italian and English, and can be accomplished both on foot and by bike. To make them, you need to book. The reservation must be made before 2 pm on the Tuesday before the visit day, at the Tourist Information Office in Bibione or in the Municipality of San Michele (minimum 5 participants).

One of the most recognized places of the historical past of San Michele is the Villa Biaggini-Ivancich, built by the Venetian family of Mocenigo in 16th century. Passed into the hands of the Paduan Biaggini in 1870, it was transformed into a field hospital during the First World War, but it was destroyed by the bombing during the Second Conflict. Since the 1950s, the villa has passed into the hands of the current owners, the noble Venetian family of the Ivancich.

Villa Biaggini-Ivancich was also an important cultural centre, which has seen over the years the presence of people such as Ernest Hemingway, Antonio Fogazzaro and Gabriele D’Annunzio.

Another place that left an indelible mark in history is the Cold War Bunker, located near the bridge on the Tagliamento, for the natural role of the river as “obstacle” and defense line.

The guided tour continues towards the Wall of History in the town part called “San Michele Vecchio”: In Via Don Bosco, where once stood the Parish church destroyed by the ’44 bombing, some panels have been placed that retrace the vicissitudes of this territory so marked by both conflicts.

The last stage of this route is the Austro-Hungarian cemetery, a sacred place dedicated to the victims of the retreat of the Piave in October 1917.

N.B.
The external area of the bunker (park near the bridge over the Tagliamento river), the Austro-Hungarian war cemetery (Via Agnolina) and the Wall of History (Via Don Giovanni Bosco) can always be visited freely.

Just 15 minutes by car from Bibione, this itinerary is a way to learn about the inland and its history, and enrich your holiday of cultural contents. Let’s take advantage of it! 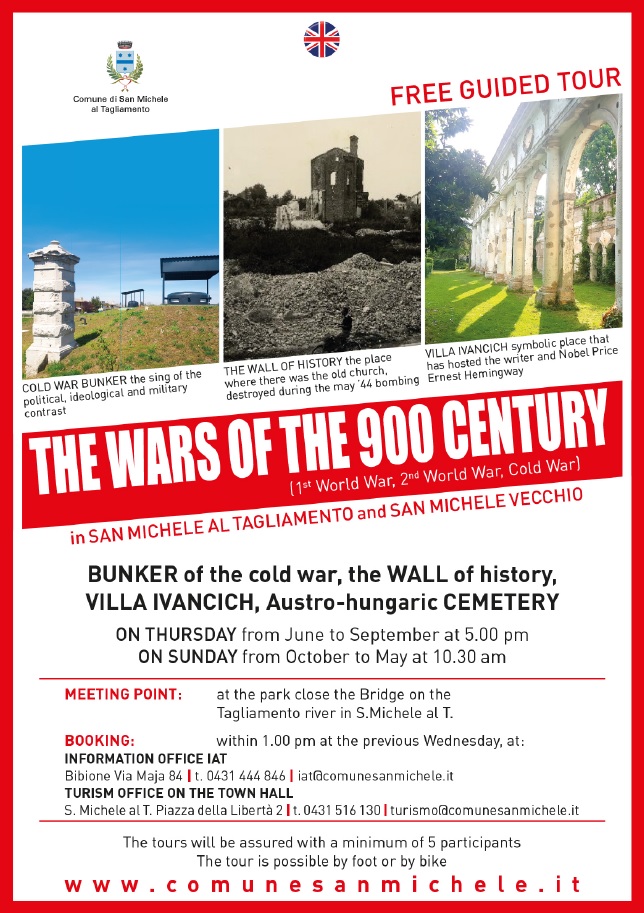 Other events in Bibione